I recently started the cryptopals challenge and had to re-study how AES works to implement it in Go. I decided to publish my notes on the AES algorithm to help my future self and anyone here get started or get re-acquainted with the cryptographic standard.

If you're interested in seeing an implementation close to the specification, checkout the one I coded for the cryptopals challenge. For a real world implementation I recommend Go's aes crypto package.

Let's start with a quick recap. The Advanced Encryption Standard is a symmetric cipher, which means that you need a secret key to encrypt a plaintext and the same key to decrypt the ciphertext. The key can be 128, 192 or 256 bits. In the rest of this article I assume that we are working with AES-128 that uses a key of 128 bits.

But AES is also a block cipher, which means that it encrypts blocks of 128 bits in multiple rounds before outputting the final ciphertext.

Since there are multiple rounds of encryption for one block, do we use the same key every time ?

No we don't do that because it would expose us to slide attacks: a cryptanalysis technique relying on the fact that we use the same key every round.

To avoid using the same key every round, we derive new keys (called Round Keys) from the original one. This is called a key schedule:

A key schedule is an algorithm that calculates all the round keys from the key.

In this article I will use the same notation found in the original specification. Let's start by defining some constants. We write:

Since there are 10 rounds, we have to produce 10 round keys. Each round key is then used in the corresponding round:

That's because first key K0​ is XOR'd with the plaintext before the first round. Check out my post explaining AES for more info.

The operations are done on 32-bit words so we adapt our notation to work with this: the result of the key schedule is an array of 32-bit words denoted [wi​], where 0≤i<11.

See how I used the notation wi​? This is because the cipher key K is actually the first round key : K0​=K.

Then each new subkey depends on the previous subkey. To compute K1​=[w4​,w5​,w6​,w7​] the algorithm is the following: 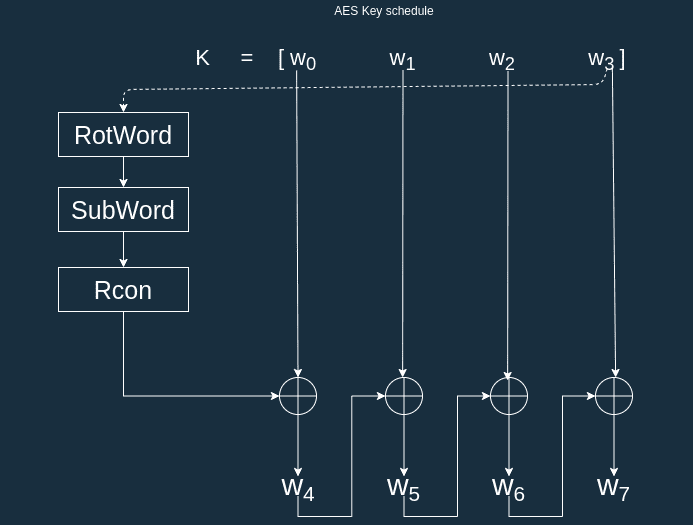 The general rule is that:

The exception occurs when we have to compute a new wi​ and i≡0(modNk​). Here we want to compute w4​ and 4≡0(mod4). In this case, the previous word w3​ undergoes some transformation with the functions RotWord, SubWord and Rcon (more on this later).

Here each ai​ is a byte composed of 8 bits. 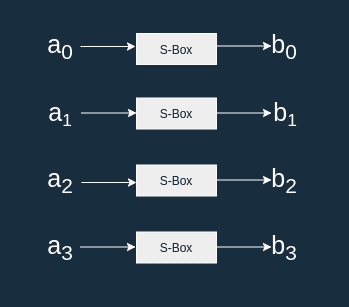 The S-box is a substitution table also used in the encryption algorithm. Think of it as a big lookup table that maps an 8-bit input to an 8-bit output. For instance b3 is mapped to 6d.

Then you can compute s using the affine transformation - source wikipedia:

In practice, it's easier to implement the S-box as a constant lookup table. I give some complementary information in my post about the AES algorithm.

Rcon is a round constant word array. For each round, you get 4-byte word. For your convenience here are the values of rcon[i] noted as rci​, in hexadecimal:

The computation of rci​ involves a lot of algebra. Basically rci​=xi−1. Where x is 02 in hexadecimal, and the multiplication is done is the finite field GF(28).

This is it, you now know enough to implement the AES key schedule on your own (with the official specification as a reference of course). One last thing, you might not have noticed that an attacker who managed to retrieve a round key Ki​, is able to determine all the other round keys as well as the cipher key K by reversing the algorithm. An attacker could retrieve a round key thanks to a side channel attack.

I wrote two other posts about AES:

I used and studied the following resources while writing this article:
Back to Blog