The challenge 12 of the Cryptopals crypto challenges is the first one having you breaking real crypto. Some of the ideas behind this challenge are not that obvious so I thought it would make a good subject for a write-up.

The goal of the challenge is to decrypt a ciphertext encrypted with ECB. Obviously, I do not know the plaintext, but I am given an oracle to help me decrpyt the ciphertext. I call the plaintext unknown-string. Thanks to the oracle I can prepend a chosen string to the unknown string before performing the encryption:

To perform the attack, I am given some instructions:

I explain the idea behind each step in the rest of this article.

To determine the block size I grow the size of chosen-string until the length of the padded text suddenly changes: this indicates that I reached the end of a block and started a new one. For instance, if one block is 4 bytes long:

Of course, the challenge is slightly different since I work with unknown-string as well. Still, I can apply the same process. 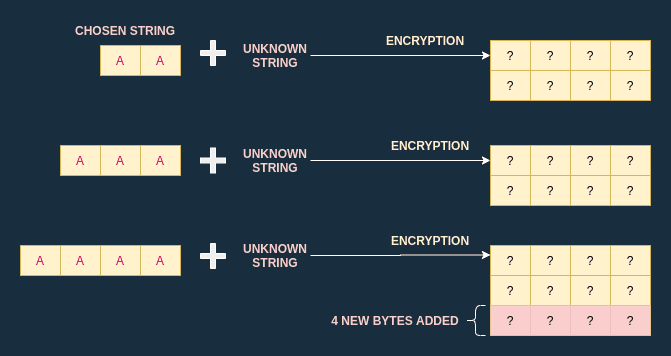 I increase the size of the chosen string by one byte every iteration. Once the ciphertext length suddenly increases, I compute the number of bytes added: this is the block size.

The challenge 8 is dedicated to detecting ECB usage. You can find my article about this challenge here. In the rest of the article I consider I have a function DetectECB at my disposal.

To keep the diagrams and the explanation simple I assume the cipher is using 4-byte blocks, when in reality it is using 16-byte blocks.

To be able to decrypt one byte of the unknown string, I have two abilities at my disposal:

I'll start with the first step: crafting special blocks. I know that the blocks are 4 bytes long, which means that an input of 7 bytes will produce a padded plaintext of 8 bytes. 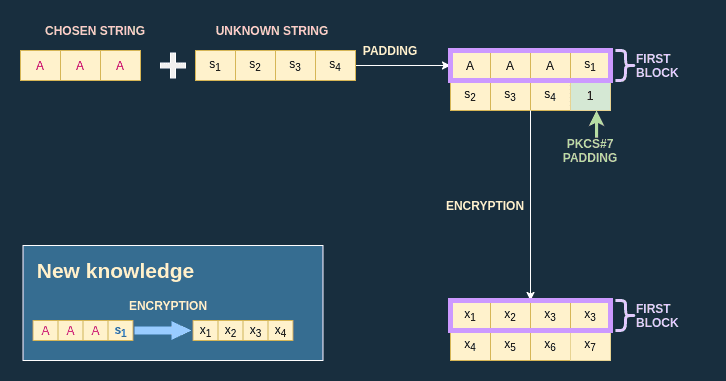 Thanks to this trick, I know the ciphertext produced by the first block [A,A,A,s1​], which is [x1​,x2​,x3​,x4​] in my example. This knowledge will allow me to perform a brute force attack later on.

Thanks to the oracle function I can perform a chosen plaintext attack. Since I know the length of one block, I can prepend the unknown string by one block composed of [A,A,A,A] and get the encryption of the block [A,A,A,A] as a result, which is [u1​,u2​,u3​,u4​] in the example below:

I can iterate over all possibilities for the last byte to create a dictionnary (also called codebook): 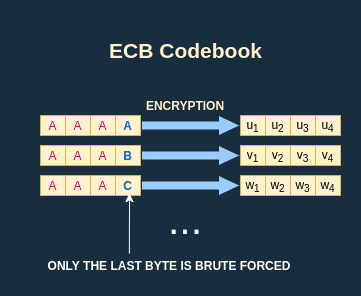 Once I have the codebook I just have to look for the input that produces the ciphertext [x1​,x2​,x3​,x4​] I acquired when I isolated the first byte s1​ of the unknown string: 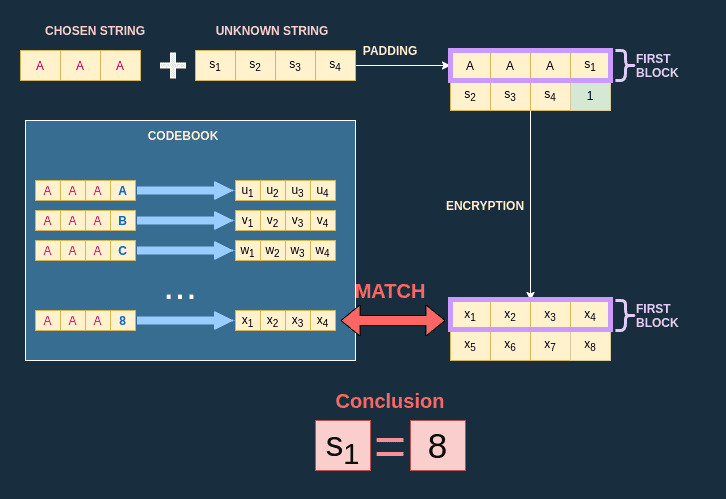 I apply the same principle to decrypt each byte of the unknown string, one at a time. Once I know s1​, I use the input [A,A] so that the first plaintext block is [A,A,s1​,s2​]. I have now isolated s2​ and I can create a codebook for this specific case. The code to decrypt one byte can be found here.

You liked this article ? Check out the other posts about the Cryptopals challenges!